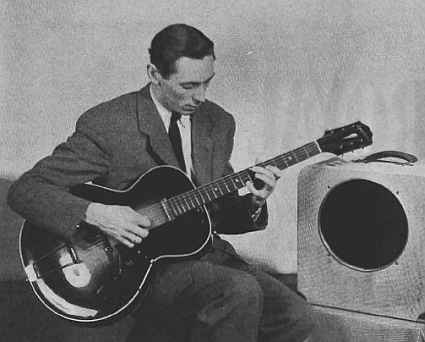 The first Swedish attempts to electrify guitars were made by two musicians from Uppsala, guitarist Kurt Wдrngren and bassist/luthier Sten Anderson. In the early 1940s they started winding guitar pickups at home for the Levin archtop guitars used by most Swedish jazz guitarists (there were a few other archtop brands, such as Crafton and Ramona, but Levin dominated). Wдrngren and Anderson were most likely inspired by the sounds of Charlie Christian, as heard on Benny Goodman records. The pickups were first sold as Solist but were later re-named Wingtone. 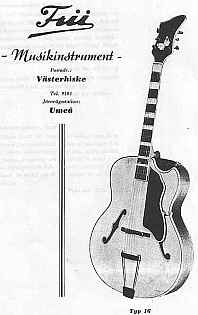 Frii Model 16 archtop guitar, late 1940s catalogue frontpage.
Butterfly inlay on head and the unusual "half" cutaway
In the early 1950s, jazz and session guitarist Kjell Sjцlund began making improved guitar pickups with adjustable pole pieces, named Kjell. They later came to replace Wingtones on Levin guitars.
There was still no industrial electric guitar production in Sweden at the time, but music dealer/luthier Gцran Frii in Umeе made a number of archtop guitars, some electrified, in the late 1940s and 1950s. Friiґs production was too small to be called industrial, though. He made a total of some 500 guitars. 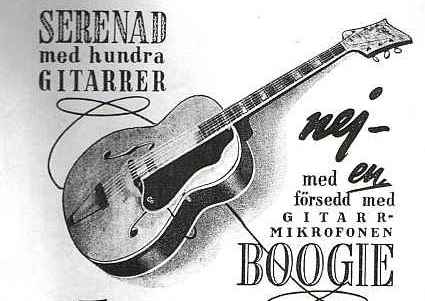 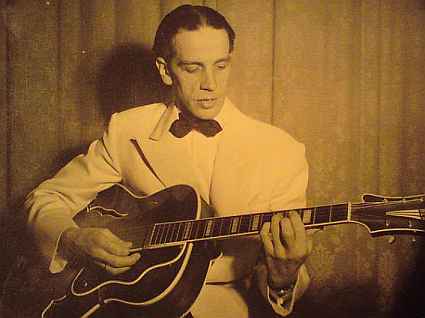 1947-1948 Crafton Rex archtop guitar, made in Gothenburg,
with a Wingtone pickup. (Crafton archtop guitars were sold as acoustics only,
so the pickup is not factory-mounted). Unusal f-holes and asymmetric head shape! 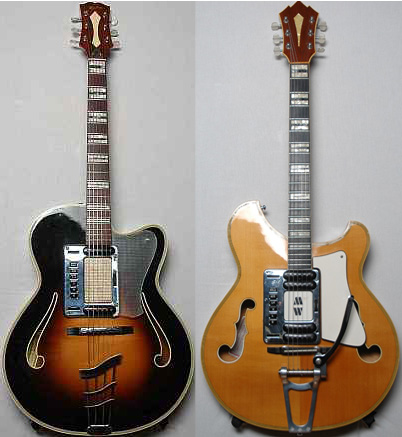 In Bjдrnum in the South of Sweden, the Bjдrton instrument factory was founded in 1945. At first, Bjдrton made double basses only, but introduced acoustic guitars in 1953. In the late 1950s and early 1960s, Bjдrton made a couple of hollowbody electric models. Some of these had Hagstrцm pickups (same as on Hagstrцmґs”glitter” guitars), some had German Ideal pickups. Several archtop guitars were made for Hagstrцm Oslo and sold as Hagstrцms in Norway. These had Ideal pickups.

Bjдrton guitar made for Hagstrom Oslo ca 1961. (Photo: Viktor Gдrdebo)
The major Swedish guitar maker beside Hagstrцm was the Levin Company in Gothenburg, founded by Herman Carlsson Levin in 1900. He emigrated to the US in the late 19th century and ran a small guitar factory in New York for a while before returning to Sweden. Levin archtops were very popular among the Swedish jazz players of the 1940s and 1950s. From the mid 1940s and until the mid 1950s, Levin archtops could be purchased with a Wingtone pickup fitted, and later also a Kjell pickup. From 1956, Levin started fitting DeArmond pickups to their guitars, first the floating models, later the models screwed onto the top.
Some Levin electric archtop guitars were sold in the US under the Goya brand name by Hershman in the early 1960s. In 1972, the Martin guitar company acquired Levin and shut down production in 1978. 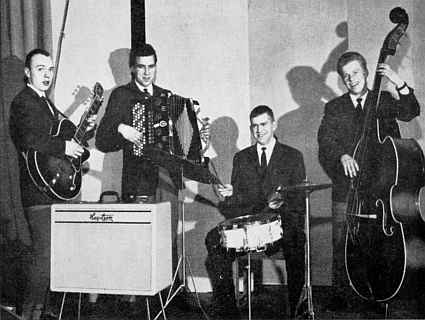 Еke Carlsson Quartet, Swedish amateur band
ca 1960 with Levin guitar, Hagstrцm amp and Bjдrton bass.
In Norway, Hagstrцm set up a factory outside Oslo in 1946. Production started in 1947 and ceased around 1961-1962. The factory made some 50,000 guitars, including a great number of archtop guitars. The archtops could be purchased with add-on pickups, either German Ideal pickups or Norwegian Vingtor pickups. At least one Norwegian Hagstrцm archtop has been with an East German Rellog “hidden pickup” under the fretboard is known. The Hagstrцm Oslo archtops were rather plain with laminate bodies. Hagstrцmґs reasons for setting up a guitar factory in Norway were postwar import and currency restrictions. The Oslo guitars were sold to the domestic market only. The factory also made archtops with other brand names such as Primo, Orkestra, and Perfekt, although the inside label says “Hagstrцm Oslo”.

Two Norwegian Hagstrцm employees, Oddvar Hasle and Alf Heder, quit in 1950 to set up their own enterprise, Hasel & Heder Gitarfabrikk. They made archtop guitars for among others Norwegian music dealer Skau. In his shop archtop guitars were electrified from 1956 onwards. 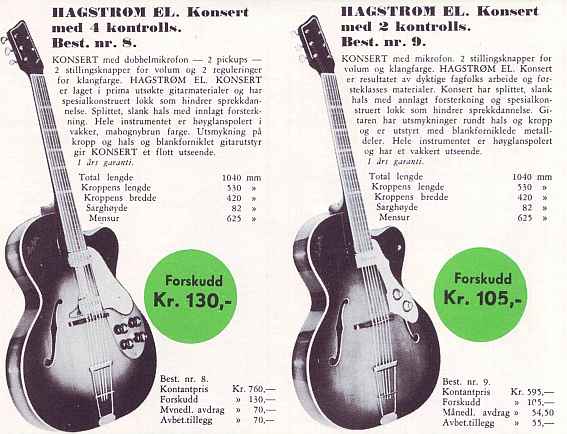 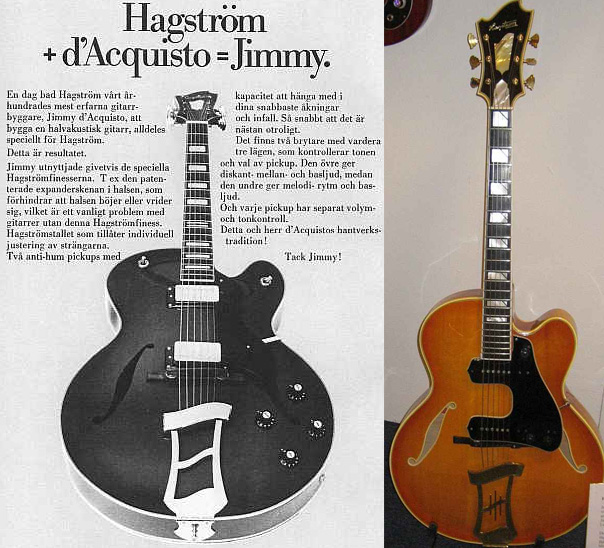 James L ”Jimmy” DґAquisto (1935–1995) is one of the most famous American archtop guitar makers. That Hagstrцm managed to enlist him in the late 60s must have been a triumph. DґAquisto visited Sweden for the first time in 1969, when he spent a few weeks at the Bjдrton factory in Bjдrnum, where the first Jimmy guitars were made. He supervised work on ten prototypes fitted with pickups by Gibson and others, that DґAquisto had brought with him from New York. Some of these prototypes are still around.
The first series of Jimmy guitars made in Bjдrnum consisted of 480 guitars with f-holes. They have two pickups attached to the top and a conventional control layout: two volume and two tone controls, plus two three-way switches. The upper switch is a regular pickup selector, the other has a tone filter accentuating bass, mid or treble. The bodies were made by Bjдrton, but the final assembly and finish was made in Дlvdalen.
In 1975, DґAquisto once more went to Sweden, this time to Дlvdalen, to supervise the design of an improved line of Jimmies, to be manufactured at the main factory in Дlvdalen. The second line of Jimmy guitars were made 1977-1979 and consists of 1,083 guitars; 727 with f-holes and 356 with oval sound holes. The latter has a floating pickup attached to the end of the fretboard, with tone and volume contros mounted on the pickguard.
From correspondence preserved, one can note that DґAquisto purchased some 50 unfinished necks and bodies for his New York workshop. The necks were reportedly stolen from a warehouse in New York before they were delivered, but the bodies are said to have been used for some of DґAquitoґs laminate guitars. 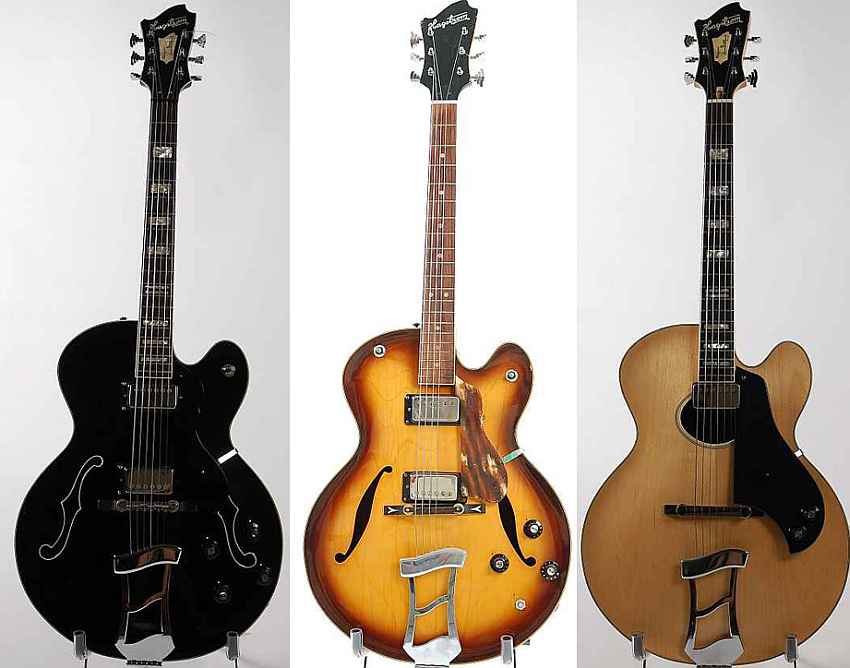 
Excerpts from the book “Superswede – Hagstrцm Guitars 50 Эears” (Reverb Publ.), by Mikael Jansson, 2008.
With permission from the author.

Norwegian Hagstrцm guitars and other brands